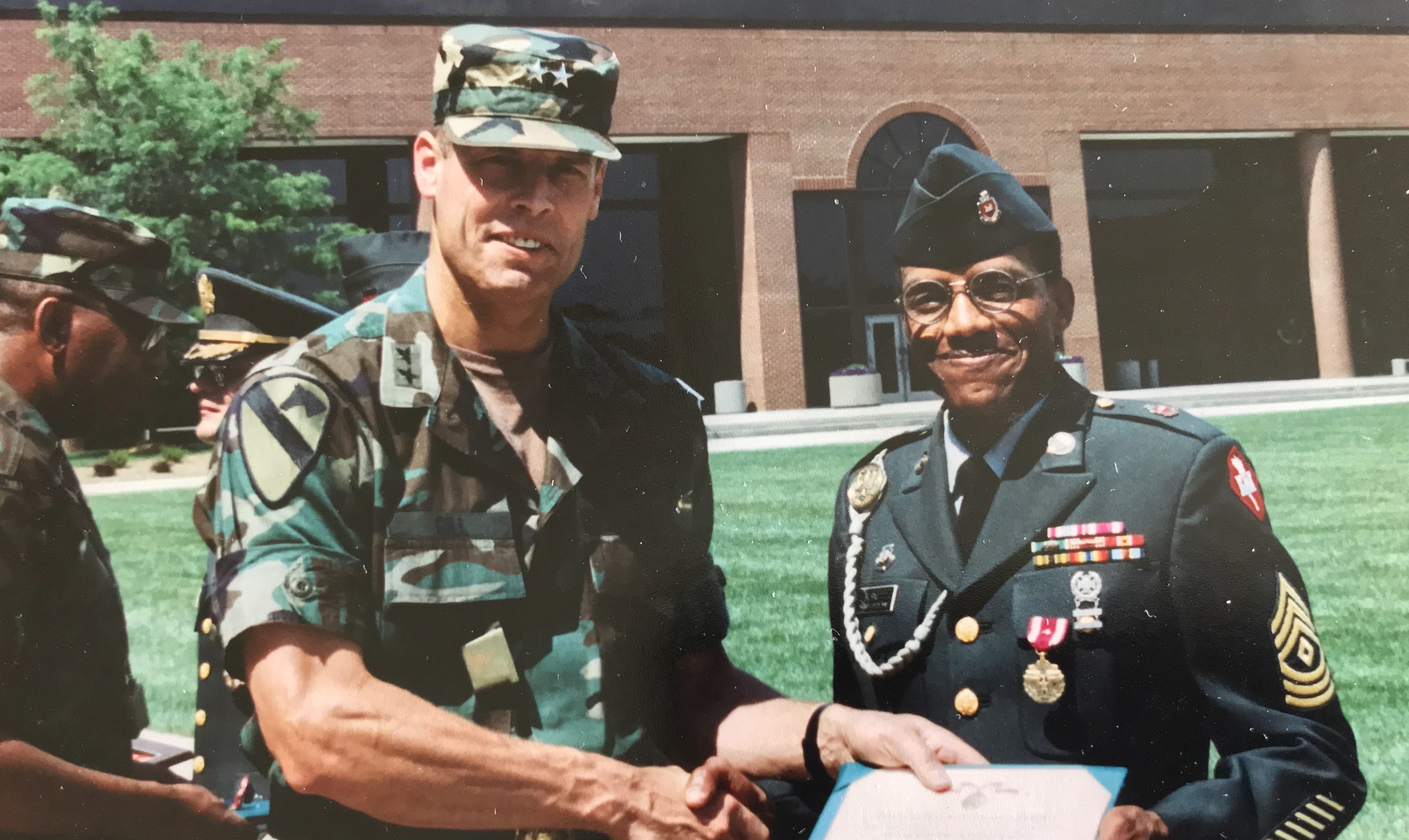 🇺🇸🎵 399th is largely written in the narrative voice and from the perspective of Christopher L. Burnett.

However, it must be noted that Terri Anderson Burnett also served honorably and with distinction for five years as a musician in the Army.

She was one of the last members of the Women’s Army Corps to transition into the integrated force that included men and women serving together as well.

It is ultimately more convenient to direct our friends, colleagues and associates to this page on our website for them to learn about our military music career and history than to continually describe small segments repeatedly to curious individuals out of context of the whole story.

This essay with images and active hyperlinks includes a relatively brief overview of what our family’s life together was like during some of our 22-year military music career history. The sections on this page include: 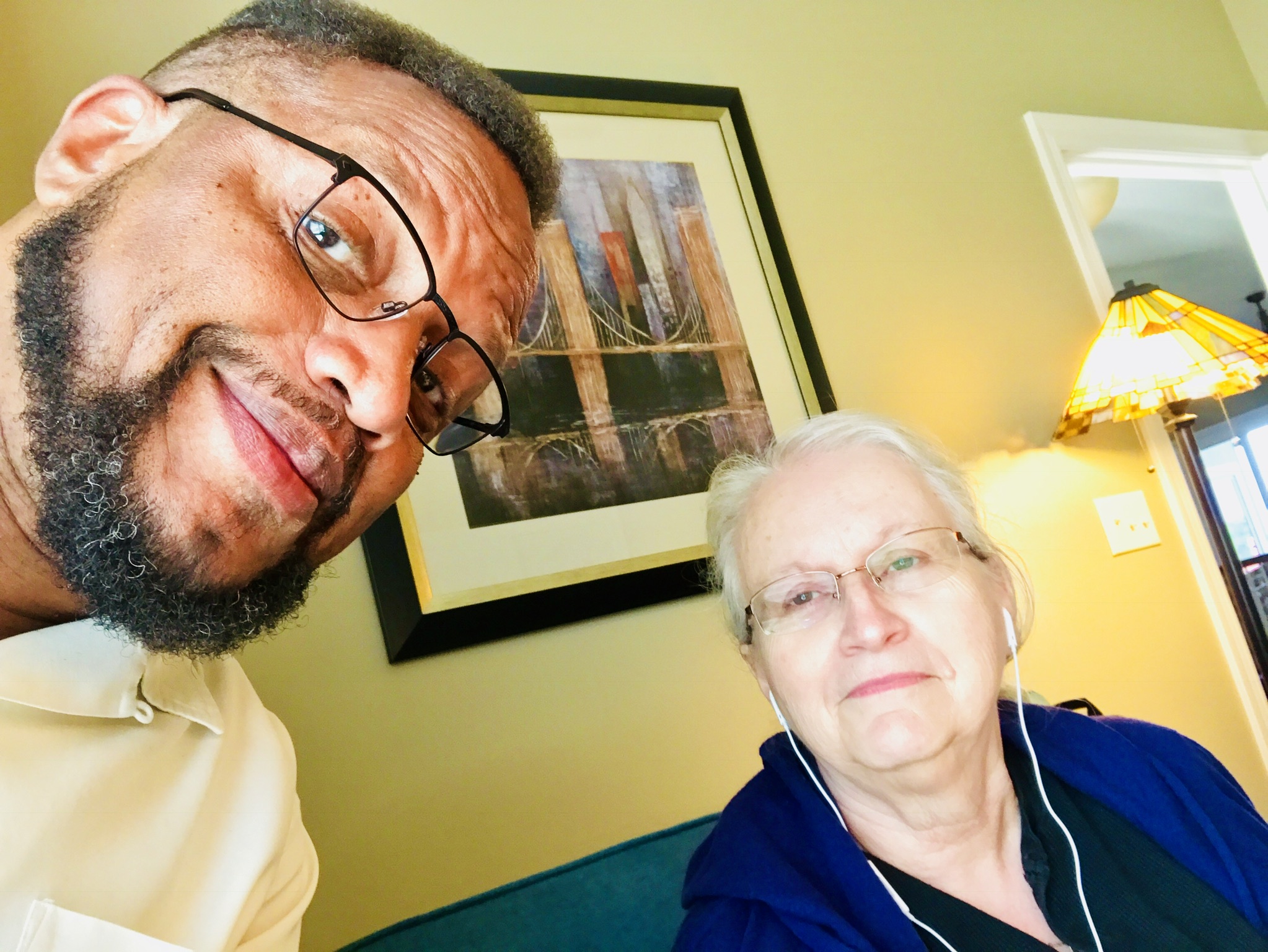 We hope you enjoy reading about our adventures.

And, we hope our children and grandchildren enjoy learning about some of our family’s history.

My favorite overall assignment was the Armed Forces School of Music where I served four times as a student and once on the Faculty and Staff as the First Sergeant of the Army Element’s Student Company which included 400 students at the time. 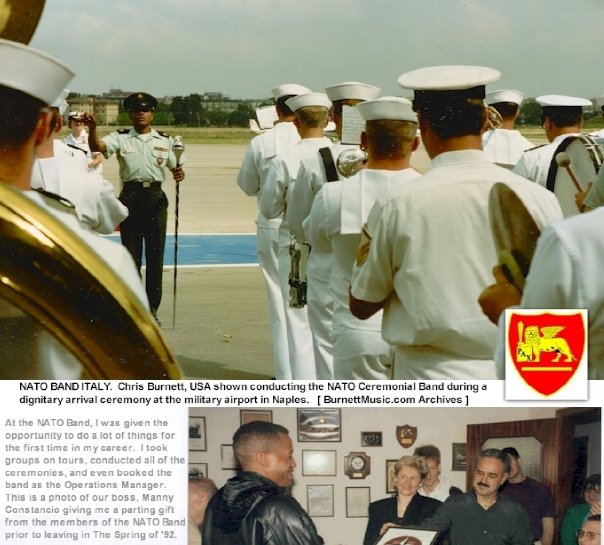 We also loved living in Germany where we met while touring Europe with the Army band based at Ansbach at the time. There’s nothing like the experience gained from actually living and working overseas as a musician. We had very good assignments. I became a qualified professional musician, businessman, and leader due to the opportunities afforded by military service. 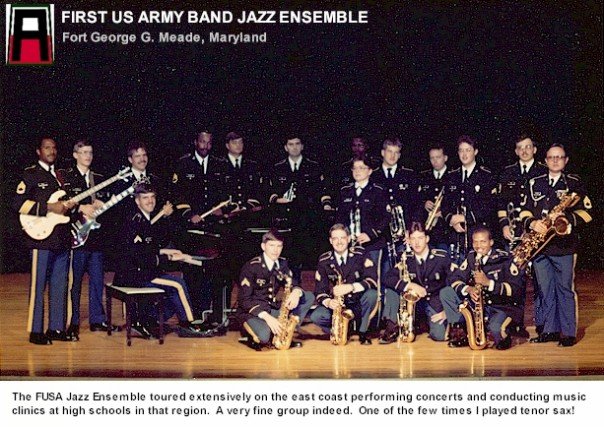 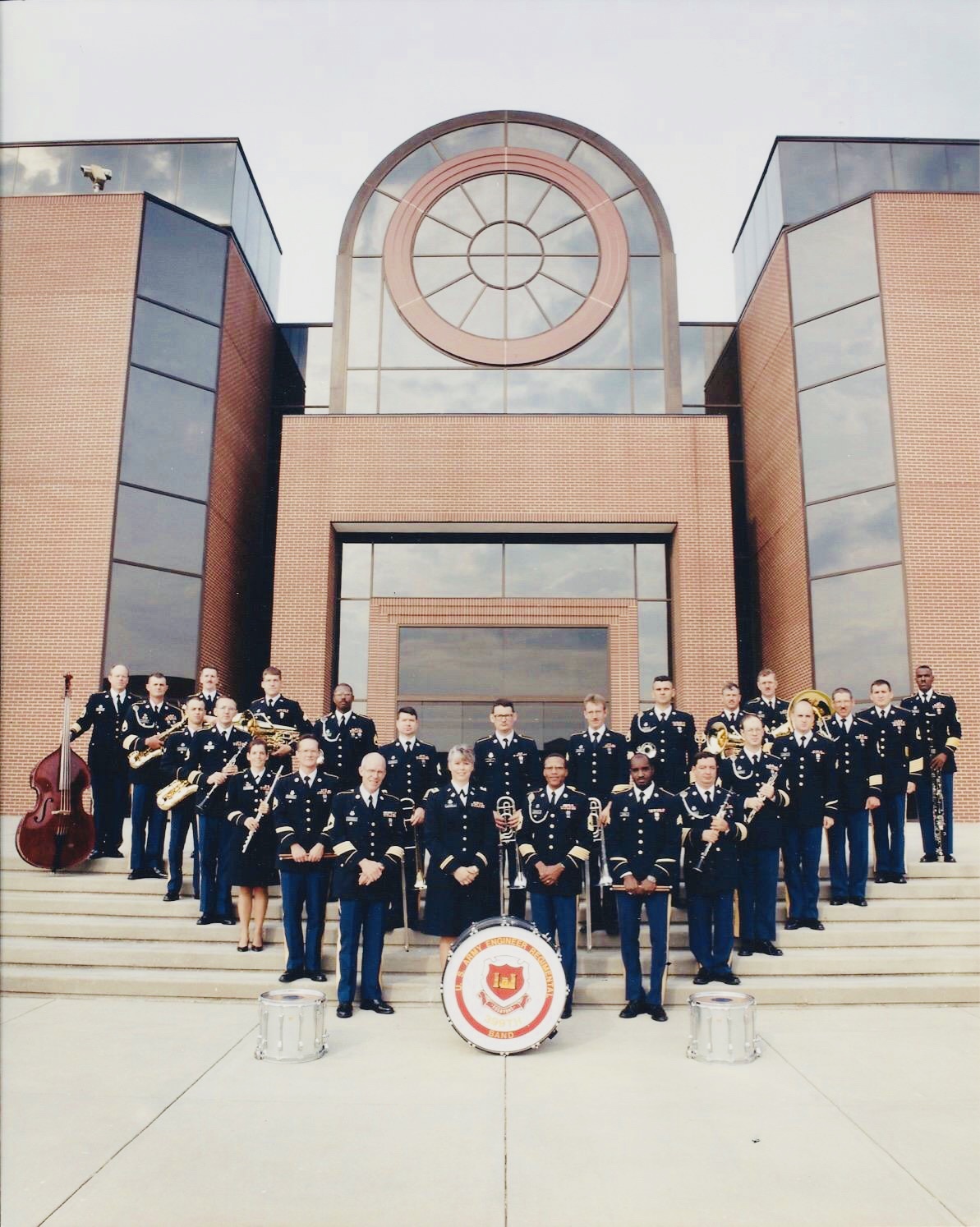 We were officially assigned with the 399th U.S. Army Band at Fort Leonard Wood, Missouri from 1983 until 1990 and then from 1993 until 1996. However, the three-year break was when I went on unaccompanied assignments to the NATO Band in Italy and the Armed Forces School of Music Staff and Faculty concurrently before returning to the 399th as the Enlisted Bandleader. I say “we” because military families are a “we” when it comes to careers – you can’t be successful in anything without the support of your family. Mine was great!

Based upon the above assignment dates, you can see that we spent ten of my 22 years of service with the 399th. I met Mr. Tandy and Sergeant Major Nelson at the Armed Forces School of Music during the annual “All-Eastern Band and Orchestra Clinic” that was once held there for many years. The military has since merged with the Midwest Clinic and no longer holds its own independent event. I was there to attend the advanced courses and had been accepted and enrolled in the warrant officer bandmaster course. 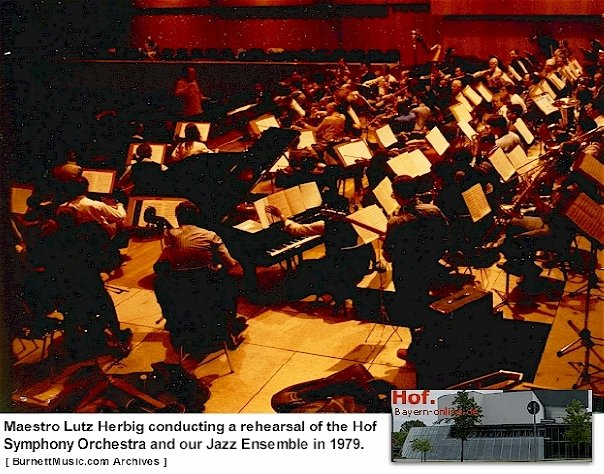 I didn’t complete the course to become a warrant officer bandmaster so I was available to return to duty as a musician in a band. I was scheduled to go to the nearby US Army Training and Doctrine Command Band which was one of the special bands then and posted at Fort Monroe. However, Tandy and Nelson approached me about coming to work with them at the 399th.

It turned out to be one of the best decisions of my life and career. And, I was able to use all of the training and skills I’d developed – conducting, performing, arranging, composing and leading musicians. When I went to the NATO Band (1990-1992) many years later, all of the experience gained at the 399th came in handy and resulted in my leading the major ensembles of that particular band.

Anyway, the 399th U.S. Army Band of this era toured an 8-state region of the midwest United States with our concert wind ensemble, large jazz ensemble, and rock band groups. Our family lived in the Missouri Ozarks for nearly 18 years – including finishing our military career then immediately opening (and subsequently closing) a music store business in that community prior to finally leaving and returning to be based permanently in my native home of the Kansas City metropolitan area, post-military career.

Tandy and Nelson left the 399th in 1985 and we almost left as well. I had been accepted to go to the U.S. Military Academy Band at West Point, New York because I had been selected to play in their large jazz ensemble, the Jazz Knights. It was a great potential opportunity – former members include musicians like alto saxophonist, Vincent Herring.

But, I didn’t get released by the new commander to go to that assignment because he and the enlisted bandleader wanted to keep me at the 399th – which really suuuucked. Looking back I can objectively say that was an example of poor leadership on the part of my command team then. I learned from it and have never forgotten how ironic it was to in effect be punished for doing a good job.

I have experienced that such things as this only make you a better person and artist. You need both good and bad for balance in life. I also learned to be a better military leader, mentor, and company manager because of poor leaders and negative situations like that one. What goes around usually comes around.

Considering everything good and bad, I made the senior enlisted rank of Sergeant First Class (E7) with only 8 years in service and ultimately retired in one of the most senior positions as a First Sergeant (E8). So, I served 14 of my total of 22 years in military service as a senior leader and boss. Not bad for a sax player from Paola, Kansas who joined the Army with the simple goal of becoming a master musician and artist. 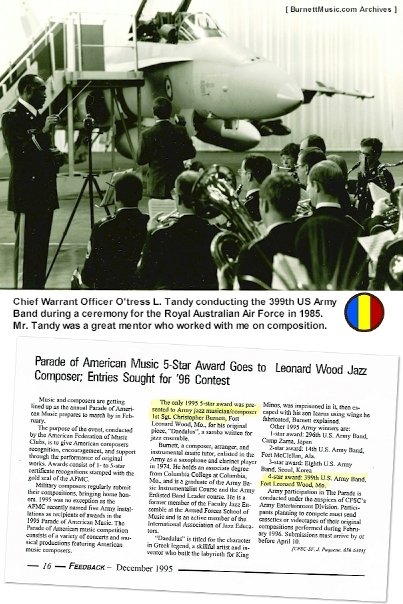 When I returned to the 399th for my final assignment in 1993, we were able to build a top-notch organization with superior musical products and quality personnel. We recruited great musicians, many who went on to lead military music at the highest levels from the Washington DC bands to the proponent agencies that create doctrine. So, it was very successful.

We also made the first actual compact disc digital recording by the 399th in 1995, which was literally the second recording ever made by that band. The band had recorded a vinyl LP under a previous command team and has likely made other recordings in the decades since.

The music posted here is available for free streaming and is from that first CD, “Essayons (Let Us Try).”

I dedicated the jazz ensemble selections on the recording to a couple of my mentors: Sergeant Major Ralph Jay Nelson, who was retired and still lived in that area at that time; and, the first Master Warrant Officer for Army Music, Maurice Williams, Jr., who was the immediate former leader of the Army Blues Jazz Ensemble in Washington DC when he directed our Armed Forces School of Music Faculty Lab Band I performed with during my assignment there.

I have ultimately modeled how I direct, develop and administrate the programming of a large jazz ensemble after both of these gentlemen.

INFORMATION: “Essayons (Let Us Try)” was recorded and published on compact disc in 1995 by the 399th Army (Engineer Center) Band, Chief Warrant Officer Jeanne Pace, and First Sergeant Christopher Burnett – command team and producers. Essayons is French for “let us try” and the motto of U.S. Army Engineers.

HISTORICAL NOTE: US Army General, Joe N. Ballard, was executive producer and the Commanding General of the US Army Engineer Center and Fort Leonard Wood in 1995. CWO Jeanne Y. Pace was our Band Commander and Principal Conductor. Ms. Pace was a senior bandmaster at that time and went on to lead the Old Guard Fife and Drum Corps in Washington DC after the 399th. She was also the first-ever female Army warrant officer bandmaster in history. We had first met as fellow enlisted students during the Enlisted Bandleader (COI# 450-02Z50) course at the Armed Forces School of Music in 1982. We worked well together as a command team at the 399th.

The 399th was our family’s very last active Regular Army post and military band assignment, I served as the unit First Sergeant and Enlisted Bandleader. I also directed the award-winning large jazz ensemble, practiced every day,  and played woodwinds in the band.

The 399th Army Band is part of the Buffalo Soldiers of the 9th and 10th Cavalry units lineage, further validation of the fact can be found in the following research dissertation – The Organizational and Unit History of the 399th Army Band by Dana Douglas Harris. Listen. Enjoy.

*My composition “Daedalus” was named the 1995 5-STAR AWARD OF MERIT WINNER
by the National Federation of Music Clubs.

*The Engineer Center Jazz Ensemble was named the 1995 4-STAR AWARD OF MERIT WINNER
by the National Federation of Music Clubs.

PROFESSIONAL RECOGNITION: Our edition of the 399th also received top marks during the Annual Technical Inspection during our command tenure.

These inspections assessed TRADOC bands on the quality of musical training; technical proficiency; adequacy of equipment, personnel manning, and facilities; effectiveness of command and control; and utilization of the band in tactical environments, in accordance with the Army Regulation for Army Bands, AR 220-90 (now obsolete). 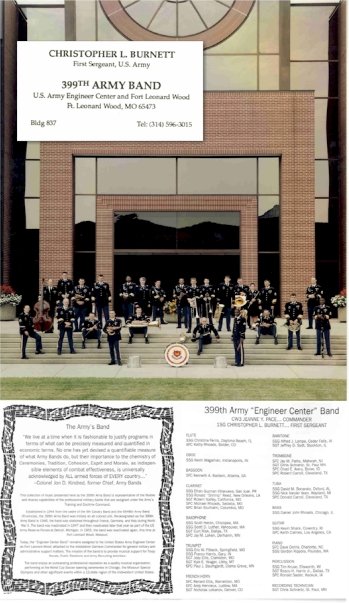 The “Essayons (Let Us Try)” recording is the very first modern-era digital recording produced in the history of the 399th Army Band and was the second overall.

05|I Could Write a Book – Rogers and Hart

12|The Heart of the Matter – B Mintzer

16|The Army Goes Rolling Along – Gruber, Bryden and Danford

END OF OUR MILITARY CAREER

One day during my normal run at the end of the day with a couple of my senior sergeants, I just stopped running. Not because I was tired or injured – I was done.

I walked directly over to the Personnel Administration Center building next to the Band Hall, called to let Terri know what I was doing, and then submitted my Military Retirement Request on DA Form 4187.

I went to the Band Hall and told Ms. Pace of my decision.

It was time for me to move on as a musical artist and leave the “nest” of Army music.

I knew that if I stayed much longer, I would end up being primarily an administrator and lose the high-level of musicianship I’d worked so hard to achieve.

I had been all I could be as a musician in the Army.

So, I finished my military career in 1996 and subsequently established myself as a professional musician and recording artist in the general music industry. 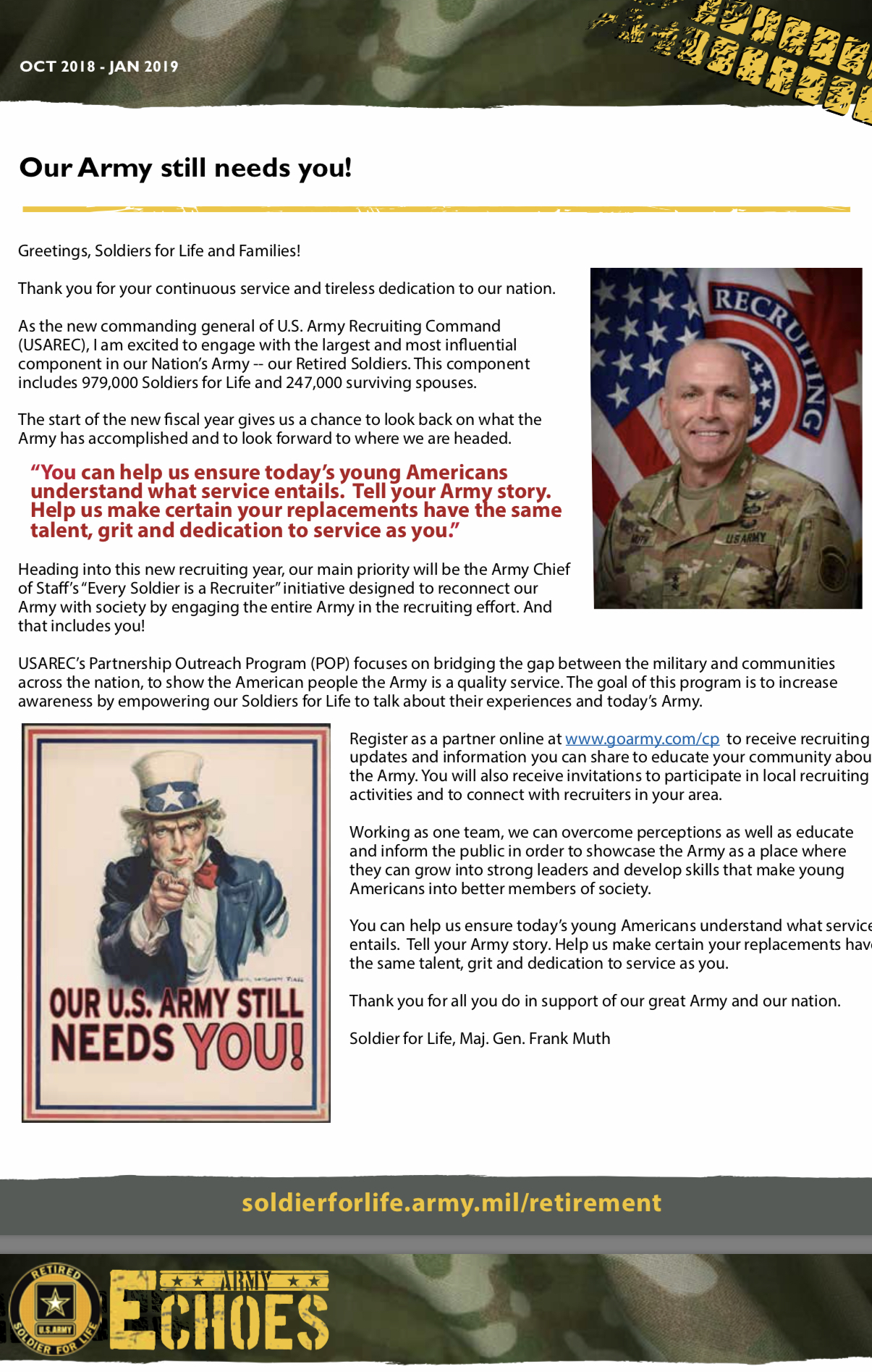 CONTEXT: Our service began during the Post-Vietnam Era and concluded after the First Gulf War. 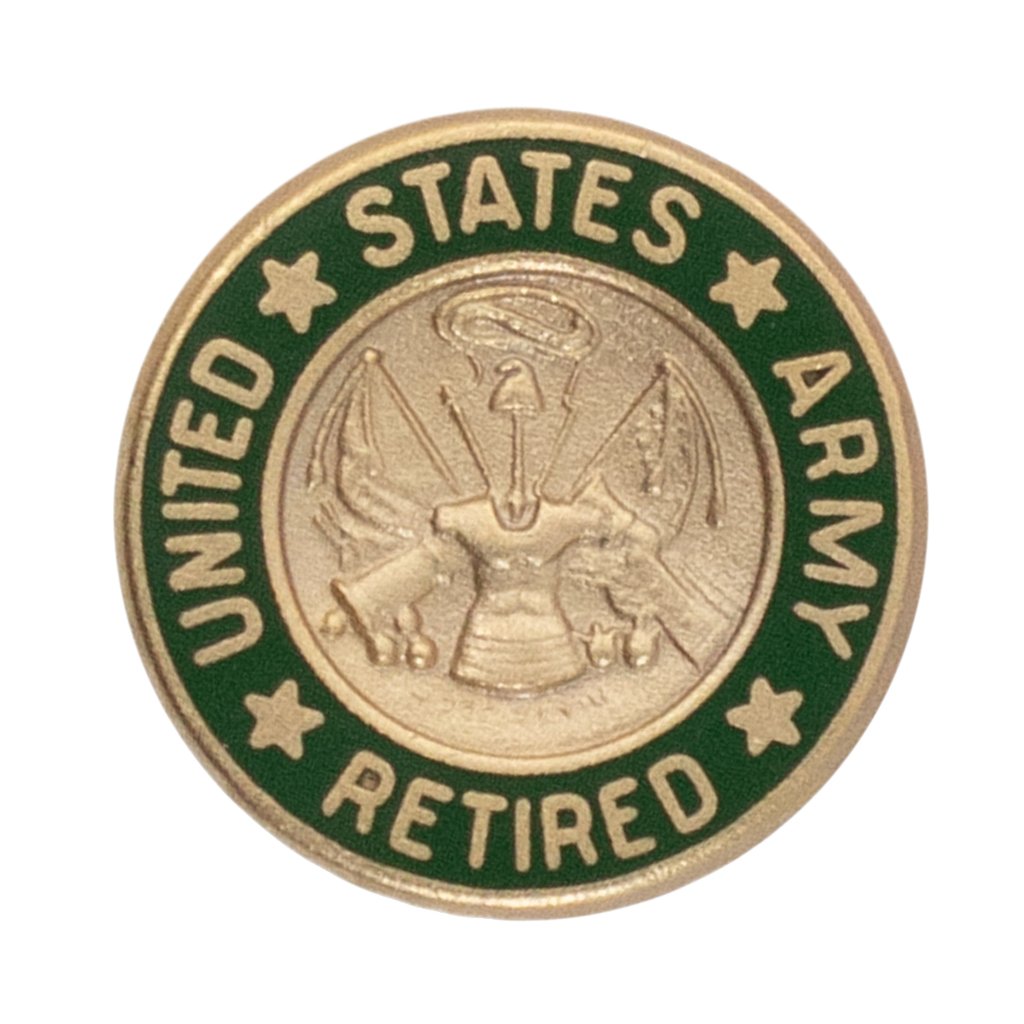 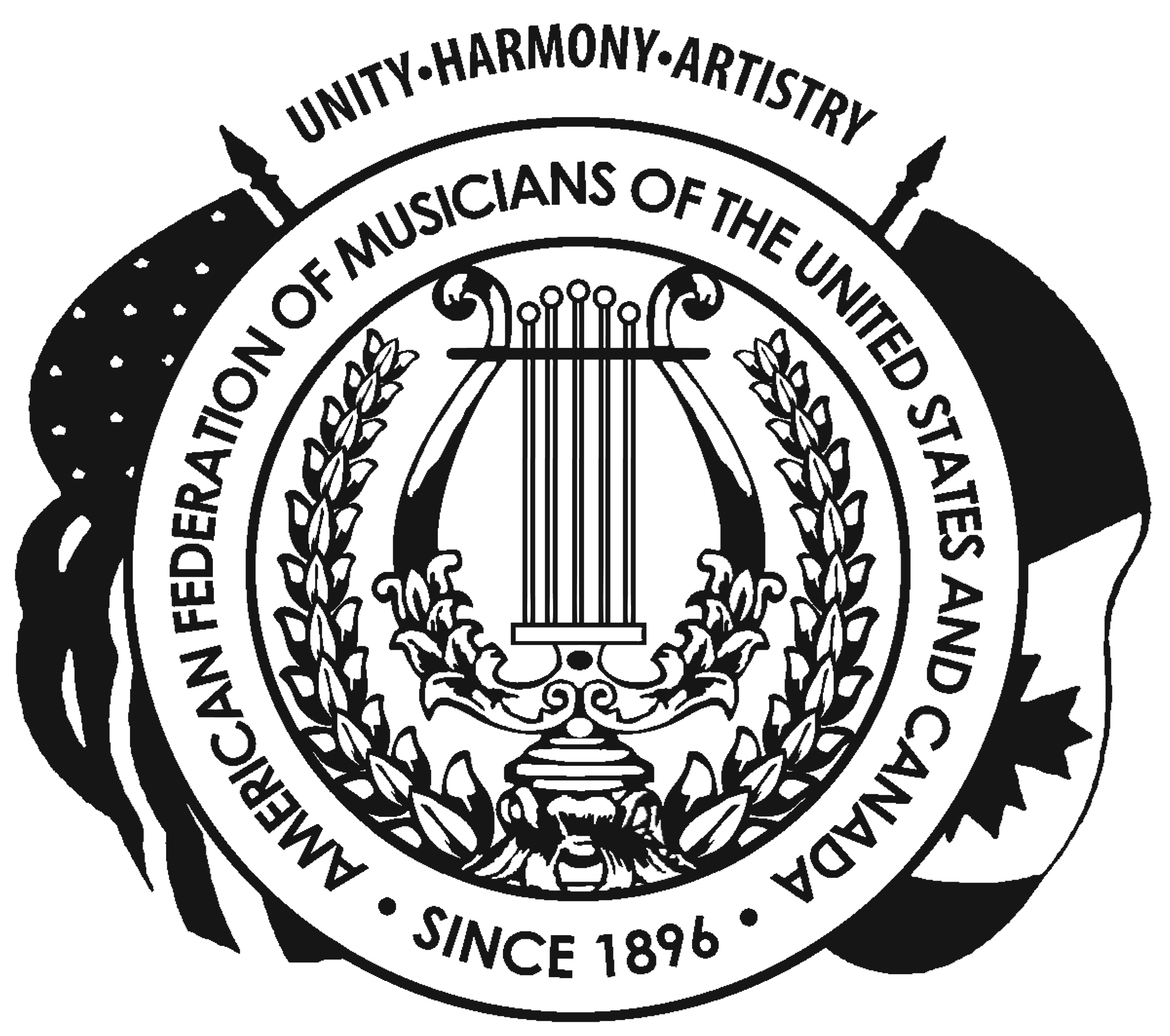 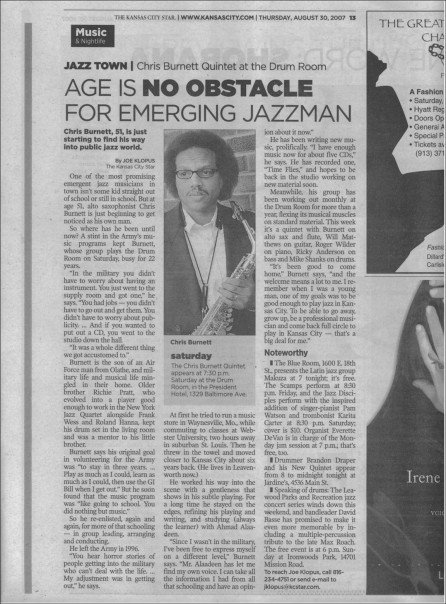