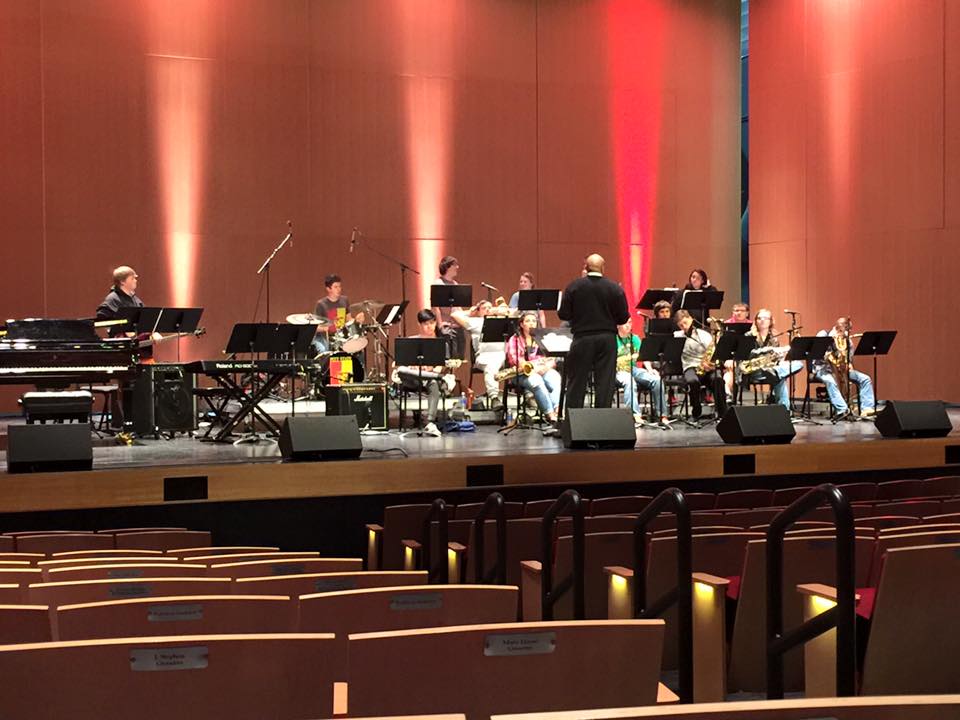 Musical Selections – laptop or desktop computer recommended to listen to audio that is found for each selection of music and you can download the entire 2015 KMEA District II Honor Jazz Ensemble AUDIO BUNDLE .ZIP FILE:

1. ANOTHER STORY by Mike Tomaro 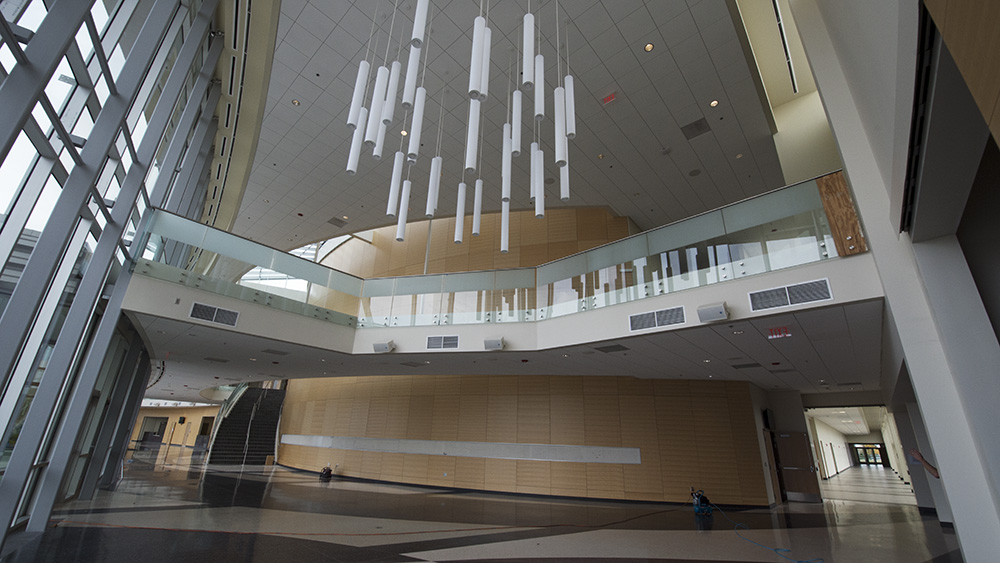 –
Inspired by the Herbie Hancock 1969 classic Tell Me A Bedtime Story, this well-scored original celebrates a relaxed straight-8th groove from start to finish.
–

Former member and musical director of the Army Blues jazz ensemble, he now serves as Director of Jazz Studies at Duquesne University in Pittsburgh, where he originally earned his BS degree in music education. He was later awarded his MA degree in Performance (with highest honors) from George Mason University in Fairfax, Virginia. Mike is a member of the Pittsburgh Jazz Legacy Project, co-founder of the Three Rivers Jazz Orchestra, and Co-Artistic Director of the Pittsburgh Jazz Orchestra with trumpeter Sean Jones. 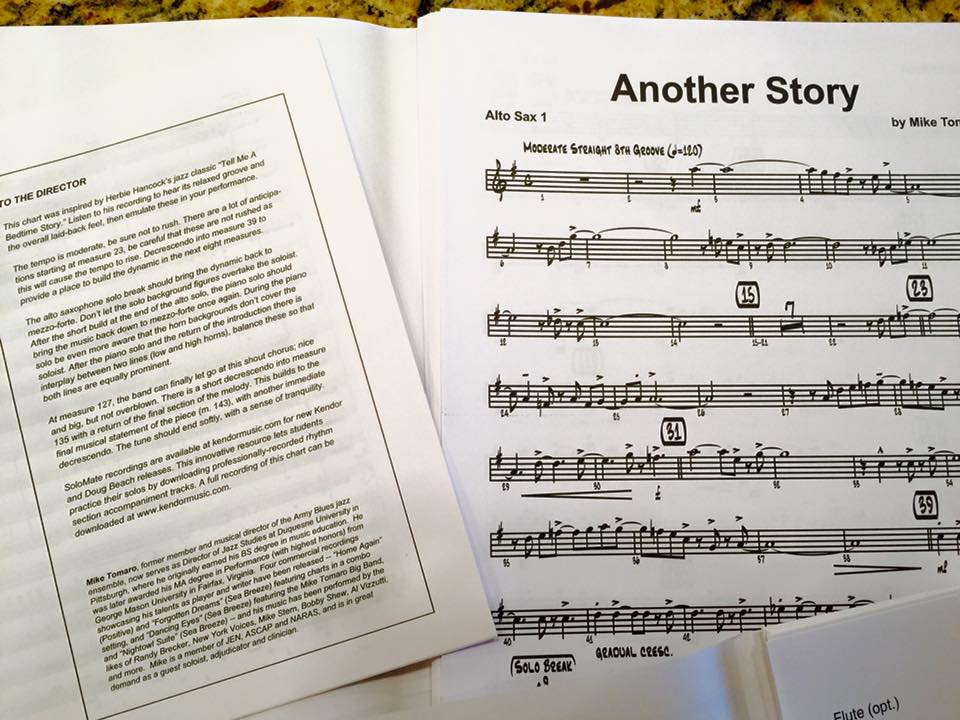 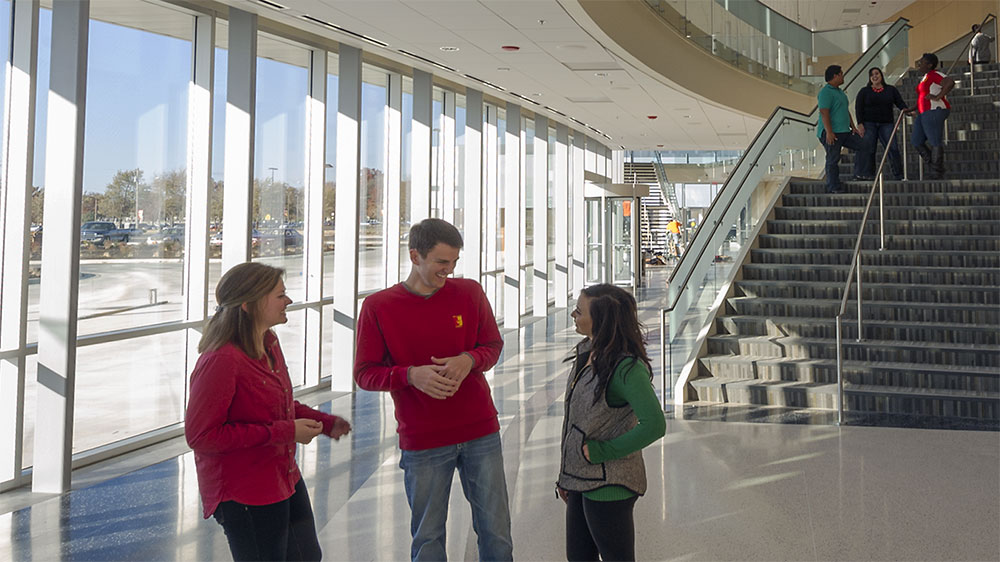 –
As recorded on the great Basie-Straight Ahead album of 1968 by Count Basie, this swing outing features solid section and full-ensemble writing, brass buckets, sax scoops, drum fills, and piano in the solo role.
–

With hundreds of educational publications to his credit, his remarkable writing career includes composing for the Count Basie Orchestra from 1968 to 1984, arranging for and leading the U.S. Air Force Airmen of Note (15 years), and doing the same for the Marine Band’s White House dance orchestra (5 years).

Sammy is in constant demand as a television and film writer, and has also arranged and conducted recording projects for Bing Crosby, Sarah Vaughan, Toni Tennille, Frank Sinatra, and others. In 1983 Duquesne University in his hometown of Pittsburgh conferred upon him their honorary Doctor of Music degree. Andre Previn, Henry Mancini, and Benny Goodman are the only others to whom that tribute has been paid. 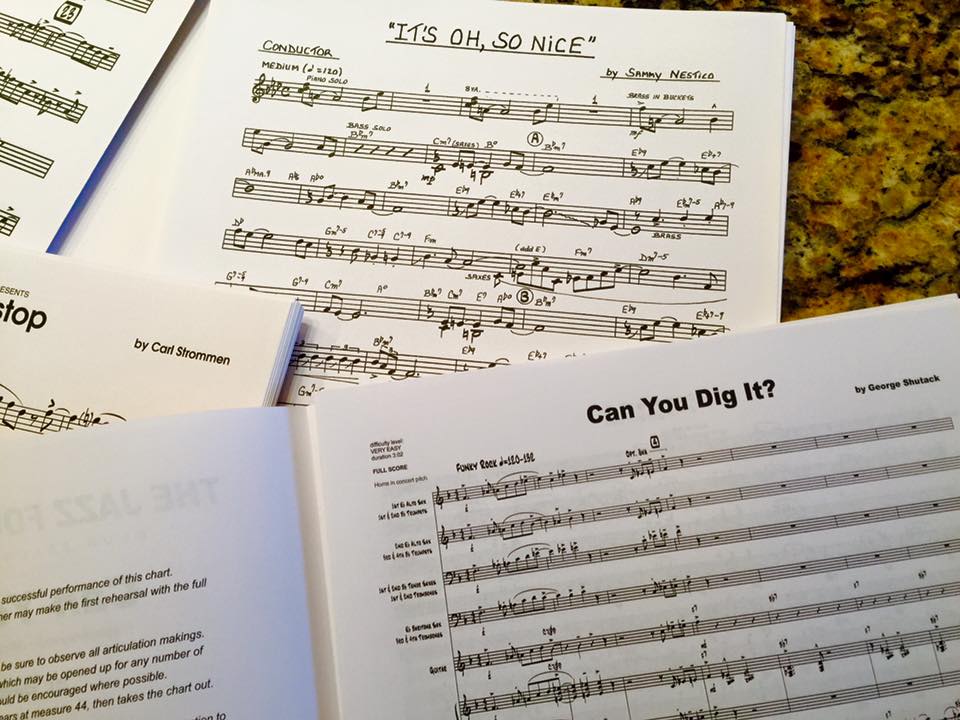 3. CAN YOU DIG IT? by George Shutack

–
This trendy original features a funky rock groove that students will love to play over and over. Add to that a strong melody with solid ensemble voicings, and you have a chart that’s ideal for developing jazz players.
– 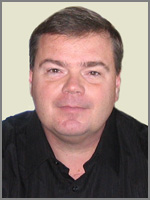 George is widely regarded as one of the leading composers of jazz ensemble music for younger players. While he has written many challenging works as well, he is best known for his charts at the grade 2-4 levels.

A keyboard player living in the Chicago area, George has been writing for Doug Beach Music since 1978. In addition to being one of the core staff writers, he is also responsible for many of the decisions regarding the company’s musical direction. With over 125 compositions to his credit, George is one of the most active writers in jazz education today.

While in college at the University of Illinois Chicago Campus, George studied orchestration. During this period, George began writing longer festival pieces and commissions for the Decatur MacArthur Jazz Ensemble in Decatur Illinois. 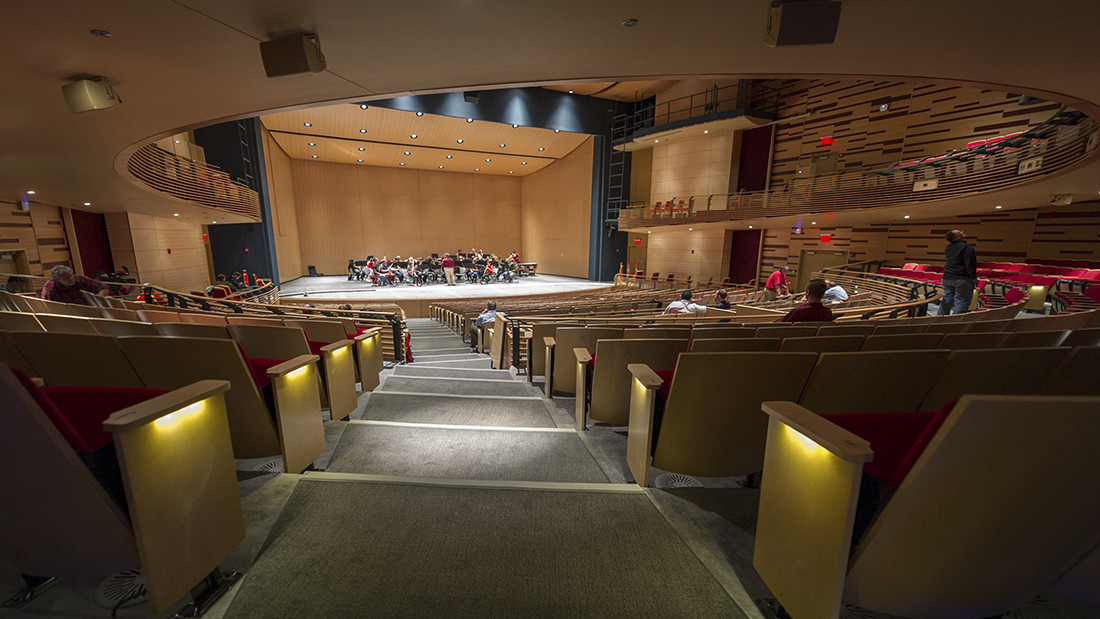 –
Following up on the popularity of the composer’s baseball-inspired big band chart, Double Play, this shuffle opens with an ad lib solo for piano and grooves from start to finish.
– 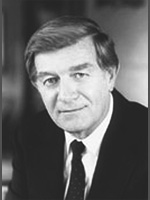 In a recent interview, Mr. Strommen was asked how he manages to successfully write for so many different settings, as an arranger and as a composer. “My first non-published arrangements were for jazz band – starting in high school. My first assignments in the publishing world were for arrangements of “pop” choral music and what was called “easy” jazz band – for Alfred Publishing when they were still on Long Island.

Arranging assignments for wind band followed for Alfred and Warner Bros. String writing came a bit later (I took violin lessons) – One of my favorite assignments was for the the wind band setting of Riverdance – still canʼt shake the “6/8” pulse – very infectious. And one of my most recent memorable string writing projects was for the Lincoln Center premier of Russell Robinsonʼs chorus with orchestra work, De Profundis. In both cases, I acted as an orchestrator (maintaining the integrity of the music) rather than as an arranger where one can take some liberties with harmonic structure, rhythms, etc. – usually associated with jazz band writing.”

“As for as the composing part, my models initially were the British wind band writers and “Americana” – Copeland and Ives – just wonderful material – for the player and the listener. For jazz band, the list is endless – Basie, Gil Evans, Thad Jones – and on and on. Commissions are often theme driven. The commissioning party might suggest a tribute to someone or some institution, a memorial, a celebration – sometimes “in the style of”; sometimes just write “what you want” – where the orchestration and arranging background is essential is when these commissions are for school groups. Keeping the writing within the limits of each group’s performance level is critical. In all cases, I try to involve the students and director in the process – from inception through the publishing process – it is, after all music “education”. “Outside of school groups there are fewer constraints, which, in many ways, make the scoring easier.” 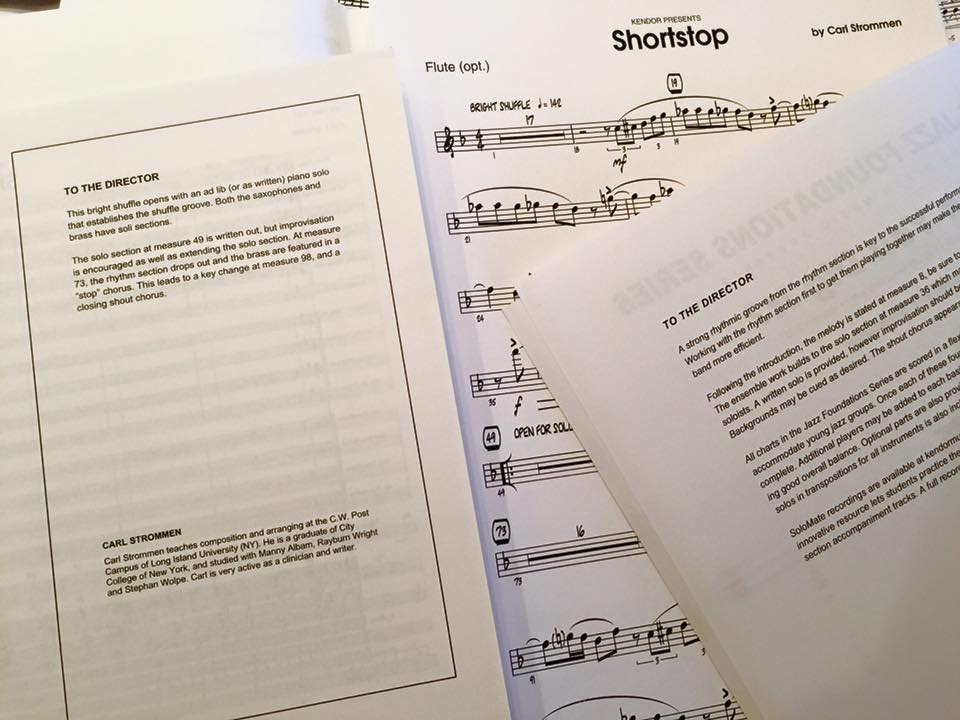 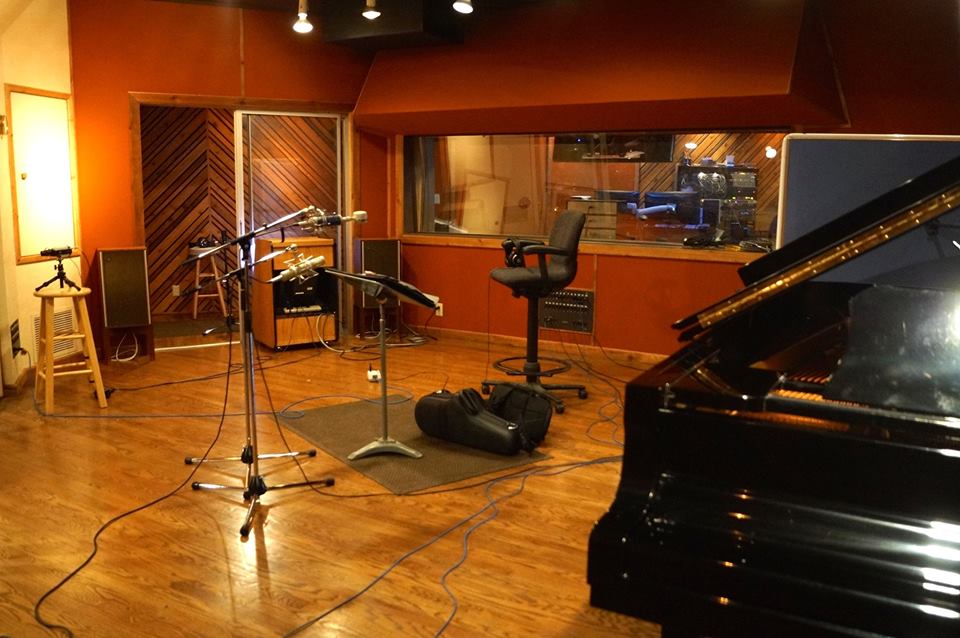 –
How are jazz careers made?

Many have remarked on the big historical shift: musicians used to apprentice on the road with masters and learn the language firsthand, but those cultural conditions are fading, and the bandstand has been replaced by the graduate degree. There’s truth in that narrative, and yet it fails to account for the full variety of paths that players are taking as they strive to find their voice in this music. For alto saxophonist Christopher Burnett, the journey involved spending 22 years as a musician in the U.S. Army.

He left the service in 1996 — “I’ve been out nearly as long as I was in,” he says — and resettled in 2001 in his native Kansas City metropolitan area. Two years earlier, in 1999, he had released his debut recording, Time Flies, and in 2008 he followed up with Theme Music, both on the Artists Recording Collective (ARC) label that he co-founded with saxophonist Erica Lindsay and pianist Sumi Tonooka.
– 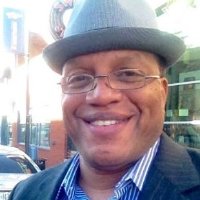 A native of the Kansas City Area, award-winning composer and saxophone artist, Chris Burnett began his prolific professional start and rose to prominence while leading, touring and recording with US military bands from 1974-1996.

During this era, Army band organizations required leaders to direct and manage all operations of a military company – fiscal, finance, administration, training, marketing, and publicity. All of these business duties were mastered during the course of a career and performed in addition to and in conjunction with the daily conduct and performance of hundreds of professional musical engagements and concerts each year by the military band companies he was posted with.

Subsequently, Mr. Burnett is the 1995 5-Star Award of Merit Winner of the National Federation of Music Clubs for his original composition and arrangement for big band titled, Daedalus. He has also received numerous awards, letters, and decorations for superior military service performance.

As an artist/businessman and modern thinker, Mr. Burnett was an early explorer of the digital music landscape. Through skillful and innovative promotion and marketing tactics, Burnett garnered more than a half-million music downloads and sold CDs to fans in 38 countries via the original MP3.com (1999-2003). This was before most musicians had figured out that there were other ways than major record label contracts and brick-and-mortar retail stores to reach listeners with their products.

Burnett founded a retail music store business immediately after his military career and held an adjunct position as director of the jazz band at Missouri Science & Technology. He has also served as Acting CEO and Director of Marketing of the American Jazz Museum in Kansas City. Burnett is a professional jazz artist, music educator, and businessman. 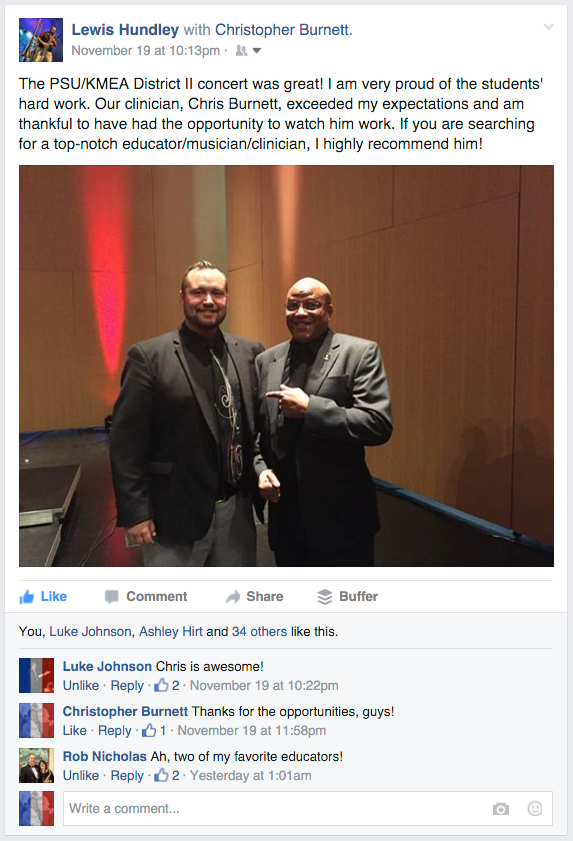