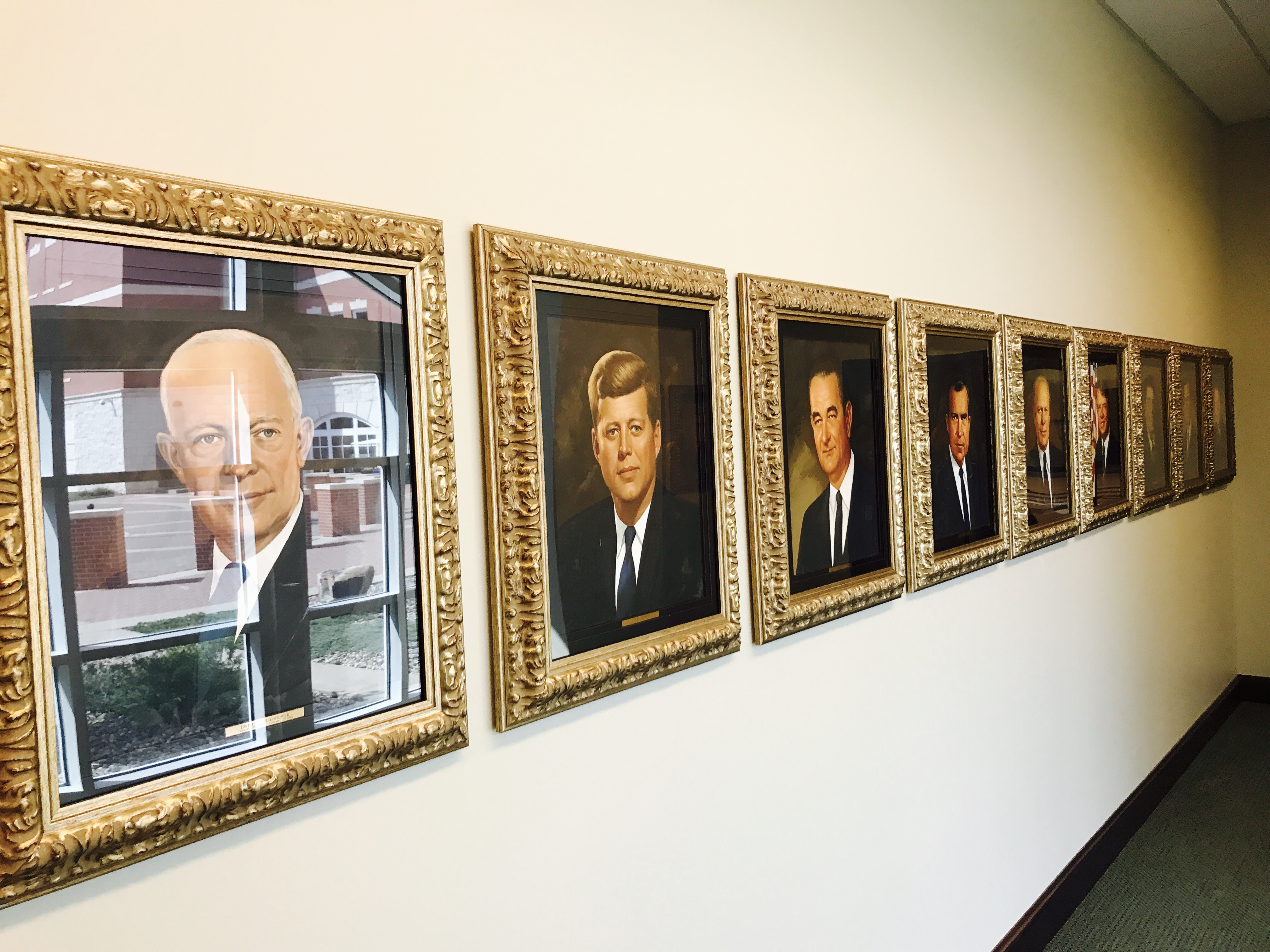 1957 to 1963: Lived in France, Michigan, and Colorado as an Active Duty US Military Family prior to father concluding his career and returning the family to the Kansas City metropolitan area.

PHOTO: Giving a clinic to the PHS Jazz Band

1974: Selected for the Madrigal Singers vocal ensemble and studied Music Theory at Paola High School under the direction of Michael Lindeman (Kansas)

1974: Passed auditions for both the US Air Force; and also, for the US Army music programs – chose Army.

1974: US Army Basic Training at Fort Leonard Wood offered a job opportunity with The White House Communications Agency (WHCA) due to high aptitude test scores, but remained on the path with the military to work as a Professional Musical Performing Artist instead.

PHOTO: Us on the bus going to a performance somewhere in Germany, circa late 1970s

1977 to 1980: Berklee College of Music Arranging and Composition Course (Boston)

1979: After a two-year engagement and touring Europe together with the Army band, married the flutist, Terri Anderson Burnett in Copenhagen (Denmark)

1981 to 1982: Conducting Study with Dr. Robert B. Tennyson through American University (Washington DC)

1983: Armed Forces School of Music – Graduated from Advanced Course with a 3.05 Audition Score (Major Command Band Qualification, C1) as a Saxophone Artist and qualified for all Senior Positions within Army band organizations

PHOTO: Mr. Burnett is honored to be the USD 453 Woodwind Artist-In-Residence and Jazz Clinician

1983 to 1985: Studied the Joseph Schillinger System of Musical Composition volume I and volume II privately with O’tress L. Tandy (Missouri)

1985: Offered 02S (Special Band) Jazz Saxophone position unsolicited by US Military Academy Band’s Jazz Knights but was deemed mission essential by CWO Bucher and 1SG Moore and not released for this prestigious reassignment.

1990: Handpicked by the Army Music Assignments Branch to serve in the NATO Band as the senior Army musician representative as a Woodwind Instrumentalist and an Ensemble Bandleader in one of two total US Army musician slots with the multi-service and multi-national Allied Forces Southern Europe (NATO) Band in Naples, Italy

1999 to 2003: Promoted worldwide by the Online Music Distribution website: MP3.com as an Artist via the Internet (San Diego)

2001: Started writing articles for the original “Musings In Cb” column online at All About Jazz – a comprehensive portal and still arguably the largest jazz website in the world

2002 to 2007: Interned as Record Label Manager and Staff Arranger for a private Kansas City-based music label.

2004: (November) Performed for the first time as a leader in Kansas City, leading the Blue Monday Jam at the Blue Room located on the corner of historic “18th & Vine“

2008: Joined the Faculty of Kansas City Youth Jazz by a personal invitation from co-founder, Leon A. Brady

PHOTO: The issue with ARC featured in Down Beat Magazine(March 2009)

2009: Elected by the organizational general membership to the Mutual Musicians Foundation At-Large Board of Directors (Kansas City)

PHOTO: Roy Hargrove graciously took this photo with me during our festival (Kansas City)

2011: American Jazz Museum (Kansas City) the 2011-2012 Jammin’ at the Gem performance series season sold out attendance and contributed to the organization’s balance sheet

2012: Accepted personal invitation of Gene Hall to join the Kansas City Jazz Orchestra Board of Directors

2012: Successful Marketing and Communications Manager work with the American Jazz Museum (Kansas City) resulted in the 2012-2013 Jammin’ at the Gem performance series season exceeding requisite attendance and contributing to the organization’s balance sheet

2012: Successful Marketing and Communications Manager work with the American Jazz Museum (Kansas City) resulted in the launch of a brand new website for the organization that features an enormous amount of viable content, yet is accessible with minimum clicks

2013: Successful Marketing and Communications Manager work with the American Jazz Museum (Kansas City) resulted in the development and launch of AJM Mobile APP on both the APPLE APP STORE and the ANDROID MARKET; thus extending the global reach of the organization

PHOTO: Feature article in KC STUDIO MAGAZINE “The Vibration of Everything”

2013: Successful Marketing and Communications Manager work with the American Jazz Museum (Kansas City) resulted in the exhibition and public programming of the Smithsonian Institution traveling exhibit American Sabor: Latinos in U.S. Popular Music reaching a large number of individuals and media outlets in the region

2014: Successful Marketing and Communications Manager for the new non-profit catalyst organization, Kansas City Jazz A.L.I.V.E. (Kansas City) contributed to significant and sustained media coverage at both, the local and national levels. His team was specifically cited in a Kansas City Business Journal article.

2014: After refining his work in music education to include a small private studio of students, working on the faculty of the Metropolitan Jazz Workshop program, and conducting clinics, Chris Burnett officially joined the music faculty as an adjunct professor and woodwind instructor at Metropolitan Community Colleges (MCC-Penn Valley).

2014: Maintaining a working group to perform and record his original work, Chris Burnett forms a new ensemble using his unabbreviated first name in the title of the group – CHRISTOPHER BURNETT QUARTET to anchor the project. CbQ released “Firebird“, the first single from the new album on the Artists Recording Collective’s ARC recording label.

PHOTO: Taken while covering the Command and General Staff College for the Fort Leavenworth Lamp newspaper

2015: Appointed by the Missouri Arts Council to serve on the Advisory Panel for Multidiscipline for one term

2016: Served as the guest speaker for the 2016 Martin Luther King Day Celebration at Fort Leavenworth

2016: Invited by The Edward Jones Center for Entrepreneurship at Drury University to be its very first speaker in their new Self-Employment in the Arts series Download PDF of Mr. Burnett’s lecture, “The Story of a Song”

2016: Mr. Burnett leaves employment with the American Jazz Museum after 5 years of significantly contributing to that organization’s mission working primarily as Marketing Manager and Director of Communications, with concurrent duties at various points as Acting CEO and Director of Operations; and, immediately resumes his personal career as an arts organization & business professional, recording artist, educator, and entrepreneur in his native Kansas City area.

PHOTO: The Fort Leavenworth Lamp was a weekly print publication and is now online only

2016 to 2017: Accepts a position as the Staff Writer and Reporter with the Fort Leavenworth Lamp a weekly Kansas newspaper serving the military community for one year and wins First, Second, and Third division Kansas Press Association Awards for articles during both 2016 and 2017

2018: CHRISTOPHER BURNETT QUINTET Black Dolphin residency on the first Saturday of each month for one year

2019: After owning the BurnettMusic.com URL from 1997-2019 we were approached by a firm to buy the domain name from us to help them with their branding. We still maintain a portal to our digital properties at BURNETTMUSIC.BIZ

NOTE: This decade is still being lived and written. Visit our portal at BURNETTMUSIC.BIZ